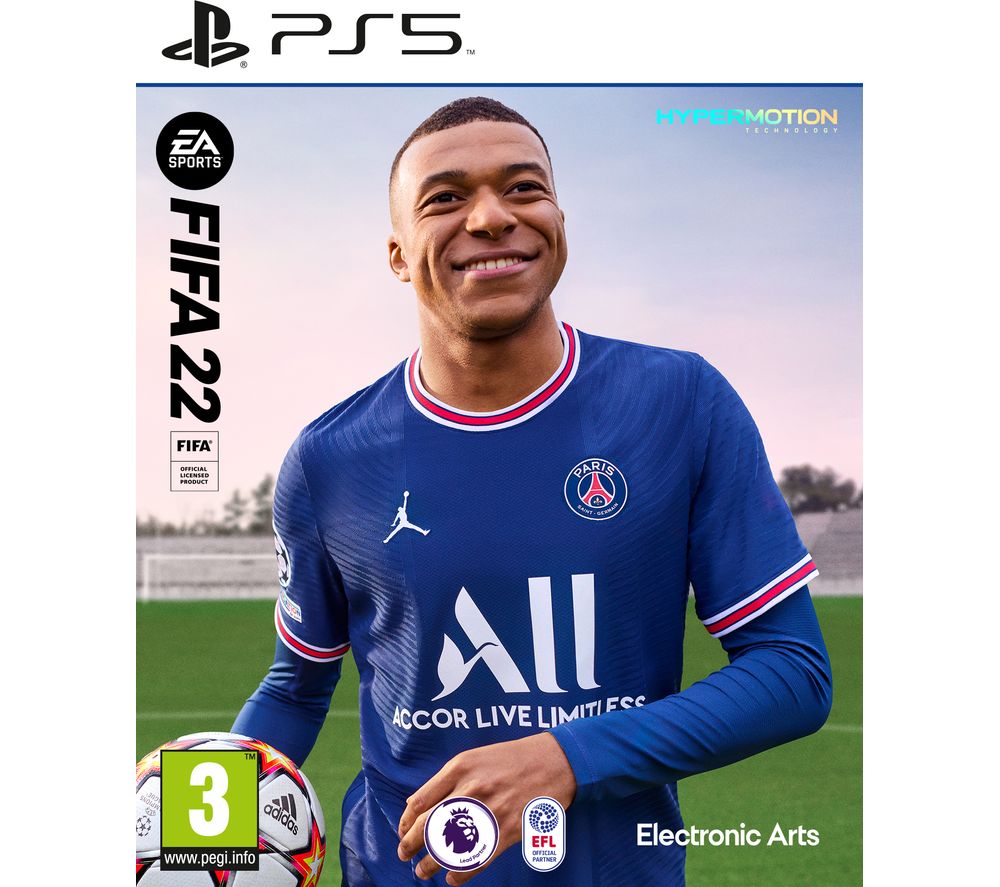 Powered by Football™, EA SPORTS™ FIFA 22on PlayStation 5 and Xbox Series X|S moves the game forward with groundbreaking next-gen HyperMotion gameplay technology that elevates every moment on the pitch. HYPERMOTION GAMEPLAY TECHNOLOGY Brand new for EA SPORTS FIFA and on next generation consoles, HyperMotion combines two technologies for the first time ever, revolutionising football gameplay GAMEPLAY Reimagined gameplay creates fundamental advances that you’ll feel across every mode in FIFA 22. A goalkeeper rewrite brings more composure and consistency to the most important position on the pitch, new ball physics reimagine every pass, shot, and goal, and explosive sprint lets you feel the acceleration of the game’s quickest players. CAREER MODE Live out your football dreams in FIFA 22 Career Mode as you create a club and lead them from relegation candidates to global giants, and enjoy an overhauled Player Career experience that gives you more ways to progress, achieve, and immerse yourself in your Pro’s journey through the game. VOLTA FOOTBALL VOLTA FOOTBALL returns with more flair all over the pitch and new ways to express your style and connect with your squad in street football playgrounds all over the world. FIFA ULTIMATE TEAM Build your dream squad and compete in the most popular mode in FIFA, with thousands of players to add to your club and countless ways to customise your Club on and off the pitch. Whether you want to play on your own in Squad Battles, together in FUT Co-Op, Online in Division Rivals, or against the best in FUT Champions, FIFA Ultimate Team™ (FUT) connects you to the world of football throughout the entire season with a range of content influenced by real-world performances and competitions including the UEFA Champions League, UEFA Europa League, and CONMEBOL Libertadores. PRO CLUBS With new customisation options to make your club stand out in the stands and on the pitch, a new player growth system that puts you in control of your Virtual Pro’s development, and streamlined social play that makes it easier than ever to find your next game, it’s time to get the squad together for a new season of Pro Clubs. UNRIVALED AUTHENTICITY Experience unrivaled authenticity in FIFA 22 with the most true-to-life experience of The World’s Game featuring football’s biggest stars and teams. With 17,000+ players across 700+ teams in more than 90 stadiums and over 30 leagues, FIFA 22 is the only place you can play the iconic UEFA Champions League, UEFA Europa League, brand new UEFA Europa Conference League, CONMEBOL Libertadores, CONMEBOL Sudamericana, Premier League, Bundesliga, and LaLiga Santander.

Genie Shopping is a comparison site where you can find the best prices for a massive range of goods.

We, and some associated third-party tools, use cookies. They’re often necessary for the site to run properly. You can learn more, and how to withdraw your consent, in our cookie policy.

By clicking ‘OK’, closing this banner, clicking a link or continuing to browse, you agree to the use of cookies.